How to Get Rid of Ants in Miami?

Ants are pests around the house because they feed on human foods, infest structures, and erect unsightly mounds in outside lawns. In some cases, ants inflict painful bites. They do not attack or eat fabrics, leather or wood in houses. However, some species can establish nests in decaying wood in structures, setting up nests for breeding and colonization.

Several species of ants are found in or around the home. In general, the most common ants can be grouped as carpenter, structure infesting, and exterior infesting. In Florida, the most common pest ants are , acrobat, ghost, carpenter, imported fire, little fire, crazy, native fire, thief , pharaoh, and bigheaded ants.

Ants are recognized from other insects because they have a narrow waist line with one or two joints known as nodes between the thorax and the abdomen. Ants have elbowed antennae. Winged reproductives have four wings,  the first pair being much larger than the hind pair. Ants are many times confused with termites. However, termites have a rice like waist between the thorax and the abdomen.Termite reproductives have four wings of the same size. 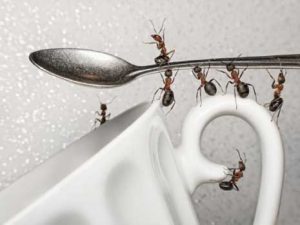 They will carry the house away if you let them

Ants are social insects. Three castes (workers, queens, and males) can be found in most colonies. Workers, (sterile females) are seldom winged. They vary in size and appearance within a given species (monomorphic – one form; dimorphic – two forms; polymorphic – many forms). The purpose of the worker is to construct, repair, defend and feed the nest. Feeding the immature and adult ants in the colony, including the queen, and they care for the brood.

Queens typically have wings, but lose them after mating. The primary purpose of the queen is reproduction. However, in some of the more highly specialized ant species the queen cares for and feeds the first brood of workers on her salivary secretions. The queen may live for many years and is usually replaced by a daughter queen. Depending on the species, ants can have one (monogyne) or more (polygyne) queens.

The male is usually winged and keeps its wings until death. The main purpose of the male is to mate with unfertilized female reproductives. After mating takes place, the male dies. What a life Hugh? Males are produced in old or very large colonies where there is an abundance of food. After reaching maturity, the male usually does not remain in the colony for a long period of time.

Ants stages include egg, larva, pupa, and adult. Eggs are almost microscopic in size and hatch into soft legless looking larvae. Larvae are fed by workers on predigested, regurgitated food. Most larvae are fed liquids, although some older larvae are able to chew and swallow solids. The pupa resembles the adult except that it is soft, uncolored and immobile. In many species the pupa is in a cocoon spun by the larva. Six to eight weeks are required for development from egg to adult in some species.

Ants create new colonies by two main methods. Flight of winged reproductives and budding. The most common method is for the male and female reproductives to leave the nest on mating flights. The mated queen builds a cavity or cell and raises a brood without the aid of workers. The small first brood workers then forage for food. The colony grows in size as more young are produced.

Budding occurs when one or more queens leave the nest without being escorted by workers who aid in establishing and caring for the new colony. Some of the most difficult ant species to control spread colonies by budding. Pharaoh, some species of fire ants, ghost, and Argentine ants spread colonies by this phenomenon.

Ants locate food by simple searches. When a scouting ant locates promising food, she carries it or a piece of it back to the nest. Any workers she meets on the way become excited and rush toward the nest. The means of communication is unknown, but some ants leave scent trails that others can follow to the food source. Ants require water and will travel some distance for it if necessary. Workers are able to bring water to the colony in their stomachs.

The best approach to ant control in the home is cleanliness. Any type of food or food particles can attract and provide food for ants. Store food in tight containers. Remove plants that can attract ants or control aphids, whiteflies and other insects that produce honeydew. Reduce moisture sources, including condensation and leaks.

Location of the nest is key in controlling these pests. Large numbers of individuals can be killed without ever solving the problem. Determining the species is most important. Most species never enter buildings, while others build their nests near buildings and forage indoors. Others usually nest indoors.

New Era Pest Control has many years of experience in resolving even the most complex ant scenario. Trust our professionals to accurately diagnose the ant type, and create a plan for the elimination without placing your kids, animals, or family members in Harm’s Way! Natural Pest Control, Safe For Kids & Pets! 100% Guaranteed – It’s a New Era of Pest Control.